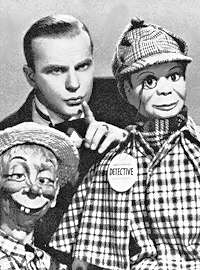 Edgar John (Berggren) Bergen was an American actor & radio performer, born to Swedish family, in Decatur, Michigan. He lived there until he was 16 (when his father died), then went to Chicago, where he attended Lake View High School and worked n a silent movie house.

He taught himself ventriloquism from a pamphlet when he was 11 and a few years later, commissioned as a woodcarver to make a likeness of a rascally Irish newspaper boy he knew. The head went on a puppet named Charlie McCarthy, who became Bergen's lifelong sidekick.

In 1938, Bergen was presented an Honorary Oscar (in the form of a wooden Oscar stauette) for his creation of Charlie McCarthy. He attended Northwestern University, but did not graduate. Later the school gave him an honorary degree as Master of Innuendo and Snappy Comeback.

His first performances were in vaudeville and one-reel movie shorts, but his real success was on the radio. Bergen & Charlie were seen by Noel Coward, at a Hollywood party, and he recommended them for an appearance on Rudy Vallee's program. That appearance was so successful that the next year they were given their own show. Under various sponsors, they were on the air from December 17, 1937 to July 1, 1956.

Bergen’s popularity as a ventriloquist on the radio (when one could see neither the dummies nor his skill) surprised and puzzled many critics, (then and now). However, it was Bergen's skill as an entertainer and vocal performer, and especially his characterization of Charlie, that carried the show over.

Luckily, many of the shows have survived and are available for audiences today to experience the phenomenon first hand. For the radio program, Bergen developed other characters, notably, slow-witted Mortimer Snerd (who bore a strong resemblance to the then-generic cartoon character now known as Alfred E. Neuman) and man-hungry ‘Effie Klinker.’

The star, however, was Charlie, who was always presented as a child albeit in top-hat, cape, and monocle, a debonair, girl-crazy, child-about-town. As a wooden vehicle, Charlie could get away with a double entendre that an adult human being could not, what with the strict broadcast standards of that period in radio.

Charlie: "May I have a kiss good-bye?"
Dale Evans: "Well I can't see any harm in that!"
Charlie: "Oh. I wish you could. A harmless kiss doesn't sound very thrilling."

Similar lines given to Mae West in a sketch on the show broadcast Dec 12, 1937, resulted in her 15-year broadcasting ban.

CHARLIE (to W.C. Fields): "If I had a wick I'd stick it in your mouth and rent you out for an alcohol lamp!”

FIELDS: "I love children. I can remember when, with my own little unsteady legs, I toddled from room to room."
CHARLIE: "When was that? Last night?"

Bergen was not the most technically skilled ventriloquist (Charlie regularly razzed him for moving his lips), but his sense of comedic timing was superb, and he handled Charlie's snappy dialogue with aplomb.

Bergen's wit in creating the striking personalities of McCarthy and that of his other wooden characters, was the making of every show they were on.

The fact that he was widely popular for a ventriloquism act on radio (where the trick of "throwing his voice" was not visible) indicates that his appeal was primarily the personality he applied to all of his wee wooden characters.

WAR OF THE WORLDS:
Bergen & McCarthy are sometimes credited with "saving the world" because, on the night of October 30, 1938 (when Orson Welles performed his War of the Worlds radio play that panicked many listeners), most of the American public had instead tuned into Bergen & McCarthy on another station, and never heard Welles' play.

Conversely, it has also been theorized that Bergen inadvertently contributed to the hysteria. When the musical portion of Bergen's show, The Chase and Sanborn Hour, aired approximately 12 minutes into the show, many listeners switched stations and found the War of the Worlds presentation already underway, with a realistic sounding reporter detailing terrible events.

Missing the opening credits (and not catching the periodic announcements that this was a radio play), people assumed the worst, and the rest is legend. Bergen made numerous appearances on television during his career.

PODINE PUFFINGTON:
In a Thanksgiving special sponsored by Coca-Cola in 1950, the new character Podine Puffington was introduced. This flirty southern belle was as tall as a real woman, in contrast to Bergen's other sit-on-the-knee sized characters.

In 1956, Bergen also hosted the television show 'Do You Trust Your Wife?', later to be replaced by Johnny Carson. In addition to his work as a ventriloquist, Bergen was also an actor.

FAMILY:
Bergen was the father of actress Candice Bergen, whose first performances were on the radio show; although she came to be weary of being called "Charlie's little sister".

In 1940 he was Grand Marshall of the Tournament of Roses Parade. Bergen's surname is cognate to the word borough, which has cognates in words and place names in virtually every Indo-European & Semitic language, as well as others.

DEATH:
Edgar Bergen died of kidney disease Sep. 30, 1978, in Las Vegas, Nevada at age 75; he is interred in the Inglewood Park Cemetery in Inglewood, California. He was elected to the Radio Hall of Fame in 1990, the same year that The Charlie McCarthy Show was selected as an honoured program.
*Source: Wikipedia)
OTR * def gp ddh